We had heard that Fraser Island was prone to rain but we had hoped the sun would stick it out for the remainder of our tour. Unfortunately this was not the case. If you missed Part I you can catch it here.

Our second day started bright and early and we were treated to a breakfast buffet: A Full English (minus the hash browns) or various cereals and toast. Our tour guide, Tom, had told us to bring raincoats with us as he was sure it would rain. Little did any of us realise just how much rain there would be.

Our first stop was the Maheno Shipwreck. This shipwreck was washed ashore in 1935 due to a cyclone and is now a famous site on Fraser Island. The dreary weather doesn’t really give it any justice but I’m sure it added to the eeriness surrounding the shipwreck. 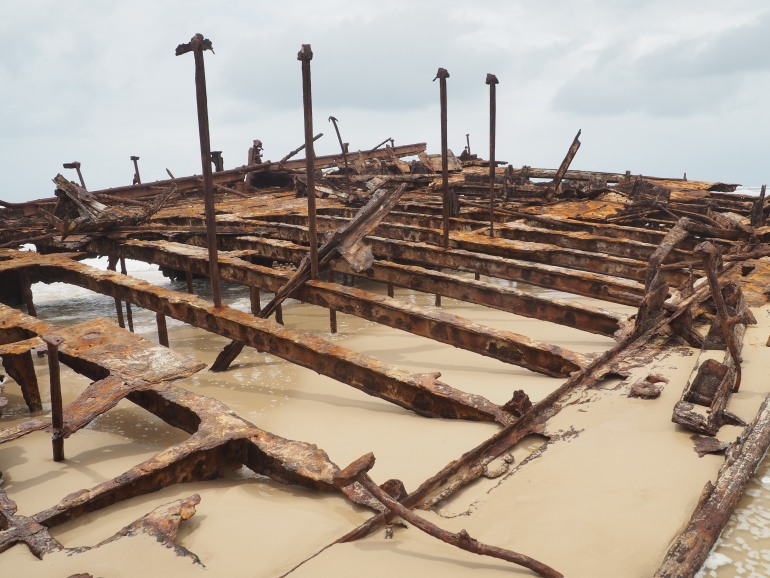 Next up was the Pinnacles Coloured Sands which is another favourite photo stop. The sand cliffs were beautiful and had such vibrant colours but again, I’m sure they would have looked much better in the sunshine. 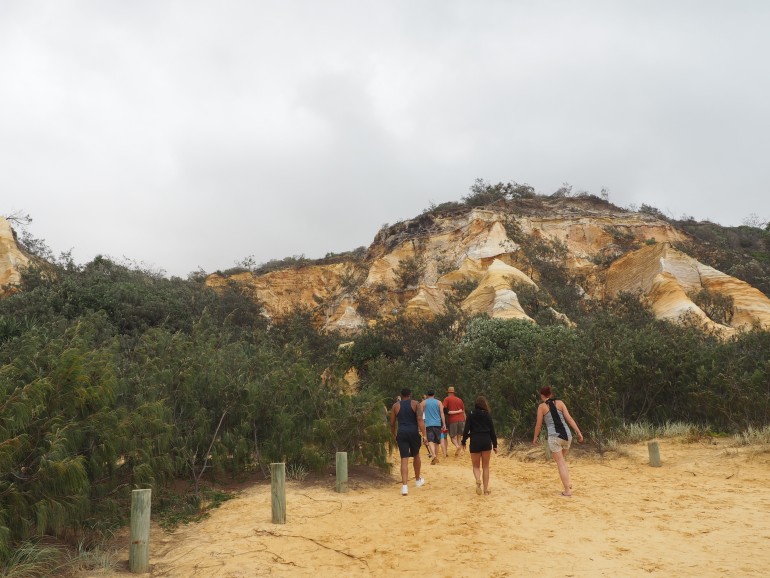 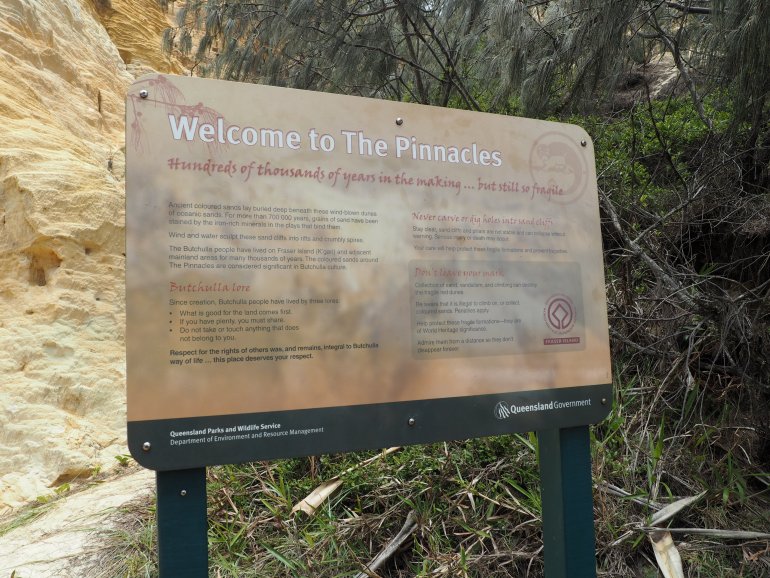 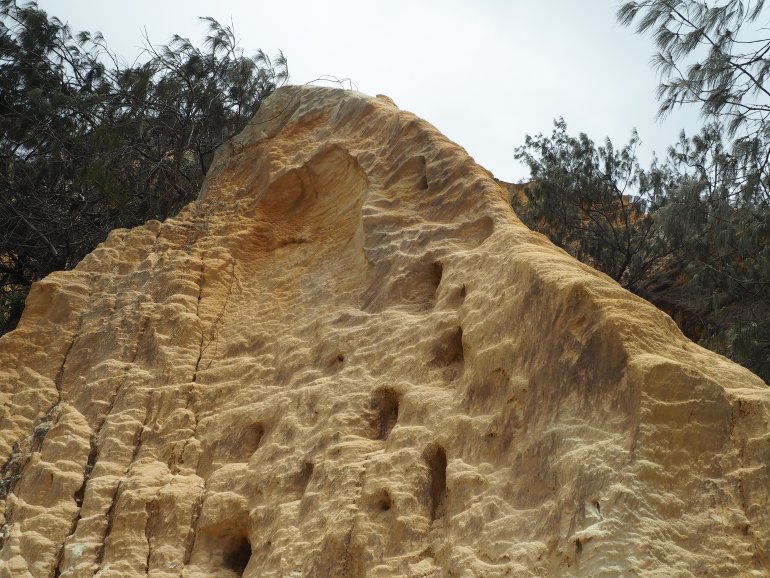 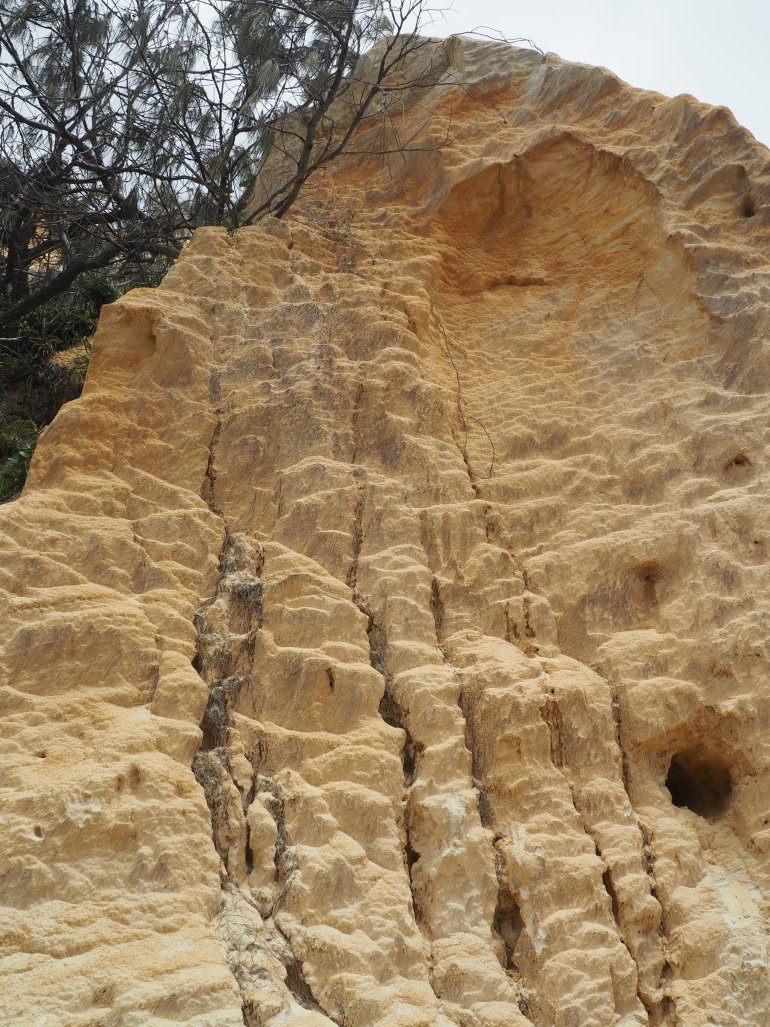 Before arriving at Champagne Pools (our next destination), we were given the opportunity to take a short 16-minute scenic flight over the island for an additional $80. It was a pretty good deal but because of the poor weather (and because I was on a budget), I couldn’t justify spending that amount. Nevertheless, about fourteen people went and I think most of them enjoyed it. A few said that it wasn’t as spectacular as they had been promised. 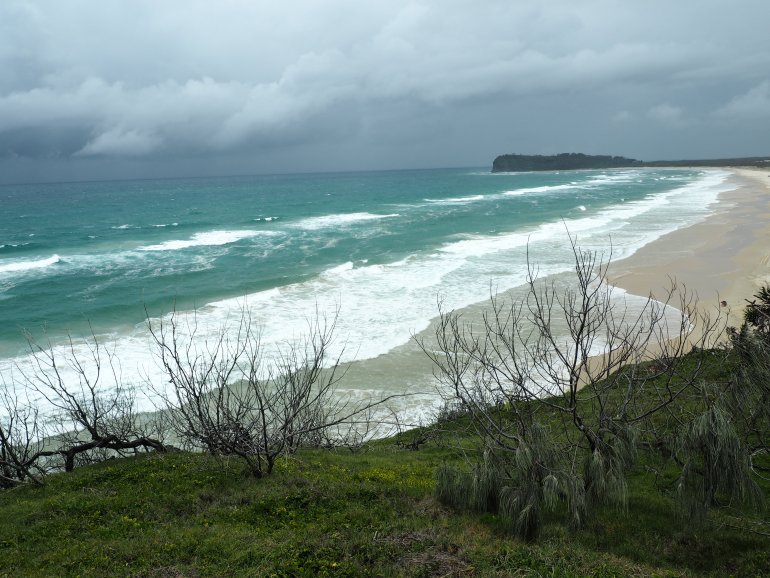 I’d heard a lot about Champagne Pools: beautiful but dangerous. They are called Champagne Pools because the water looks like champagne fizzing and bubbling as the water crashes over the rocks. I had read a couple of stories about people getting badly cut on the rocks in the pool so I decided against swimming. That and because Tom had told us that bluebottles had been found a couple of days ago and they give a very nasty sting. Plus the weather wasn’t at all suitable: cold and windy. 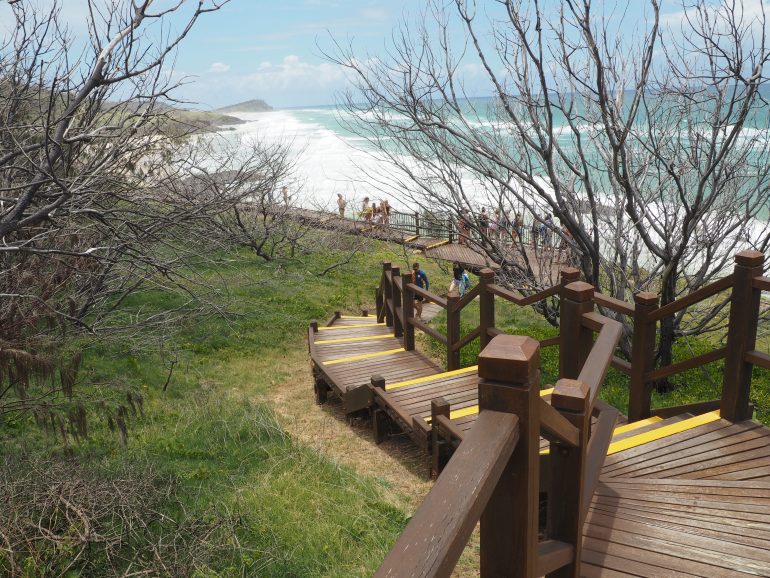 I’m glad I didn’t go for a swim and was able to quickly get away when the rain started. The rain was incredibly heavy and didn’t stop absolutely pouring it down for a good half an hour. This was the one time I left my raincoat on the minibus and so by the time I got back, I was completely soaked through and my hair was dripping wet. I took out my towel and wrapped it around me while I sat on the coach and waited for everybody else to come back. I ended up taking my dress off to dry on the seat in front while my towel covered my bikini.

We were supposed to have lunch on the beach but that clearly wasn’t happening anymore so we unanimously agreed to go to a place called Cathedral Beach where there were sheltered areas to eat. With my towel still wrapped around me, I put on my raincoat and waddled out. Lunch consisted of chicken mayo and salad wraps and there was also a small cafe where we could buy hot drinks or food.

Due to the weather, Tom told us that he was quite anxious about taking us up to Indian Head as it is 65m high and the winds were very strong. Despite this he still gave us the option to go but, cold and miserable, none of us wanted to.

I had especially been looking forward to Eli Creek because I had seen other backpackers’ adventures up Australia’s East Coast and this was one of their highlights. 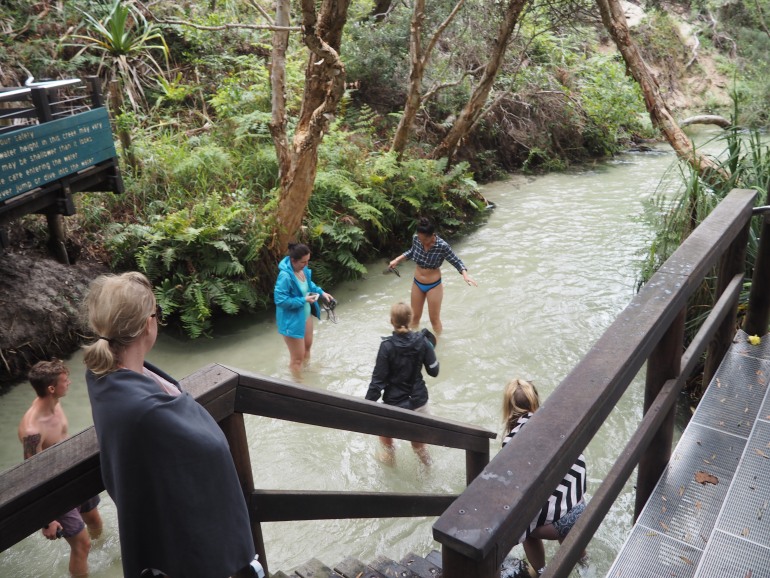 Although the weather wasn’t the greatest (and the water was freezing), I still jumped at the chance to tube down the creek. I braved the water and took my phone down with me 😬

After I had tubed to the end of the creek with one of the other girls, we went back up to the coach and grabbed a hot cup of tea. I also nabbed a cookie while we waited for everyone else. We had about a forty-minute drive to Eurong Resort for a toilet stop and then a further hour’s drive to where we were staying: Kingfisher Bay Resort.

Making a dash for the showers, Alice and I were two of the first ones in. Dinner again was buffet-style with sausages, vegetarian pizza and garlic bread among the options. It was our last night on the island so you would have thought people would be partying in the bar/club area but this was actually not the case. We spent the evening playing cards with our new friends before calling it a night.

Watch out for the final instalment of Fraser Island later this week where I talk about how I tried paddle-boarding for the very first time .

had the most wonderful weekend back in Oxford 🥂 despite finishing my degree last year, it’s been two whole years since the Classics boys and i have been all together properly. my college decided to host a special Gaude for those who finished in 2020 as we didn’t get to experience our last summer term in Oxford, nor have our Schools’ dinner {an end-of-degree dinner with your subject tutors}. it was so lovely seeing everyone again after such a long time; it felt as though no time had passed at all and yet so many things have changed. we shared stories and reminisced on our time as students, leaving me incredibly nostalgic for my four years spent at Oxford 🥺 until next time, New College 🤍
moon in pisces 🥮🎏
postcard time ✉️ surpriseee i’m currently back in the UK! who wants a postcard from London?! to be in with the chance of receiving one, like this photo & let me know the best piece of advice you’ve ever received in the comments. hopefully we can inspire each other ✨✨ | #ViolainPortugal
Sevilla: a photo dump 🇪🇸
a misty but magical day in Sintra 🏰 i’ve had lots of requests from friends and from you guys to post all my Lisbon recs for people coming to visit for a few days. i have sooo many suggestions and plenty of tips & tricks for what to avoid/what’s worth your €€ but i’m trying to figure out the best place to share them all. would you like a YouTube video, a comprehensive blog post, IG guide, multiple IG posts {which you can save for later}, IG reels/TikTok videos OR a combination?? let me know in the comments as it would really help me out! 🇵🇹 | #ViolainPortugal
someone asked me recently what i miss about the UK {if at all}, so i thought i’d share my list with you:
snaps from the past week 🤍 if you want a postcard from me {must be following}, like this post & comment below something you’d like to achieve by the end of the year and why! let’s pretend we have more than 4 months left hahaha. for me, i want to be able to do the splits again and i’ve been majorly slacking on this ☹️ i did gymnastics as a child so used to be able to do all 3 splits and now i can do 0 ahah. maybe i’ll be able to do one side by the end of the year 😂 | #ViolainPortugal
thank you all for 10k 💫💫 fiiiinally have that swipe up link haha 🤪 huge thank you to @florianonair and the french gang 💛 i know i’ve not been posting much content lately but once your girl has had a proper night’s sleep, the YouTube videos will be returning!! thank you so much once again for all of your support, love you so much 🥺🥺
Sicília, i’ll be back 🌞 | #ViolainItaly