We’ve been in Sydney for almost a week now (more posts to come) but I haven’t updated you guys!

So after our Great Ocean Road trip (amazing, but exhausting) we spent the Sunday having a lie-in. We were both so tired and worn out that we settled for a pretty chill day. We had planned to go to Melbourne’s Museum, but for $14 each and with only two hours left to get there and have a look around, we decided against it. The covered markets were also on the list but unfortunately we had run out of time – Alice fell asleep until past 3pm and I was still quite tired.

I finally got a chance to see and use the gym that evening and did my first workout in a month (I’m not even joking, my abs hurt for days afterwards) before heading back to the apartment to pack up all our things. This took some time. Luckily, I managed to get everything back into my little 46L rucksack and had even got my hand luggage packed too.

The following morning, Monday 14th Dec, we woke up fairly early as checkout was at 11pm. We rushed about making sure we hadn’t left anything behind and hurriedly shoved our oat & raisin cookies in the microwave before pulling our backpacks onto our backs. Breakfast on the go was sorted. We said farewell to the apartment and building as we locked the door and headed out into the fresh air. To the train station!

We navigated our way through the coach terminal and found the relevant ticket booth. After purchasing our airport shuttle ($22?!) we still had an hour left so we decided to go upstairs to the shopping outlet. Heading straight for Cotton On (a cute Australian brand), Alice and I found ourselves trying to decide which flip flops and which sunglasses to buy – essentials that we hadn’t brought with us. By the time we had had a good browse and finally decide which ones to get, it was time to board our shuttle.

The coach to Avalon Airport from Southern Cross Station was about 40 minutes and got us there with over an hour to check-in and get through security (ample time for a domestic flight). The coach itself was extremely cramped and I barely had any room to eat my lunch. Fortunately, the journey went by fairly quickly and before I knew it I was off the bus. The check-in procedure was quick and easy and we got through security in no time: we had 45 minutes left before boarding, and even then our flight was delayed by 20 minutes.

Jetstar Airways is essentially Australia’s version of easyjet so you can imagine what the flight was like: uncomfortable seats and no free food. It wasn’t too bad though considering the flight was under two hours. A bit of reading, napping and gazing out of the plane window later and we were landing. Not forgetting the first glimpse of Sydney’s Harbour Bridge and the Opera House we got flying over!

We quickly retrieved our bags and walked over to the information desk to find the quickest and cheapest route into the city. We hopped on a bus ($2.40) to Mascot Station and from there bought a 7 day ticket to Redfern. Little did we know at the time that our ticket would be invalid to stations past Redfern, i.e. all of Sydney’s central stations. Whoops, more on that later. We found the apartment we are staying in really easily and the owner was extremely friendly. The room is gorgeous and has everything we need from a fridge to a drying frame! She had even left us bottles of water in the fridge and a packet of Tim Tams (these are Australian biscuits and amazeballs by the way).

Tuesday 16th Dec
For some reason, Alice and I were still really tired (I guess travelling really does take it out of you, eh?) so we didn’t venture into the city just yet. We spent the afternoon getting adjusted to our new surroundings and had a walk around the town. We also did a shop in the local supermarket and finally bought some chicken and lamb (we had only got fish in Melbourne) as well as lots of different spices, mmm. We made a quick stop back at the flat to drop everything off and freshen up before having another walkabout late evening. We were looking for a decent bar and wandered around until we settled for The Dock. This was quite difficult to find and we managed to walk past it not once, but twice! I didn’t fancy anything in the bar but Alice went for a cider – even cocktails in a bar outside of Sydney central are $20?! So expensive.

Wednesday 17th Dec
Back to our train ticket situation I briefly touched upon earlier… Alice and I got to Circular Quay station and found our tickets to be invalid. We managed to get a part refund and then bought Opal cards (similar to Oyster cards back home) which would work on trains, buses and some ferries.

It was sadly raining on our first excursion out to the city and I was even wearing my Superdry jacket! We made our way over to the Museum of Contemporary Art: 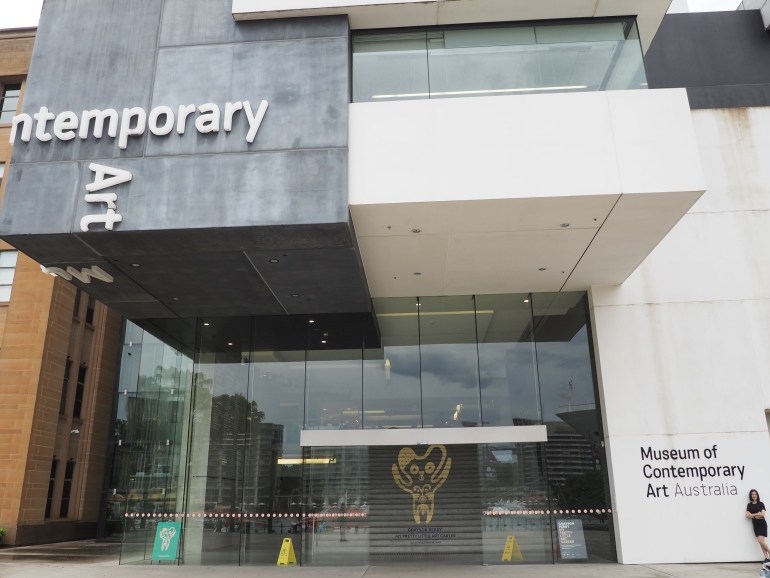 As it was still raining, we ate our sandwiches on a bench just inside the gallery before making our way to The Rocks.

The Rocks Discovery Centre, though small, was very interesting and full of information. I learnt a lot about the aboriginals in the Sydney area and how they had to adapt to the new European settlers as well as getting to know about the settlers’ lives in Australia. Alice and I then walked up the road to Observatory Hill where the view was pretty good. 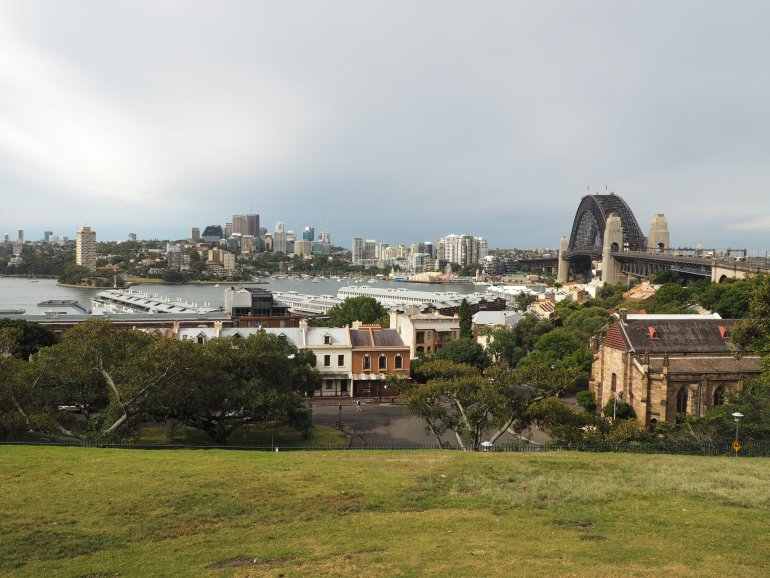 We also went into Sydney’s Observatory (another free attraction) where we got to read all about astronomy – I particularly liked the exhibit on Sydney’s past natural disasters. 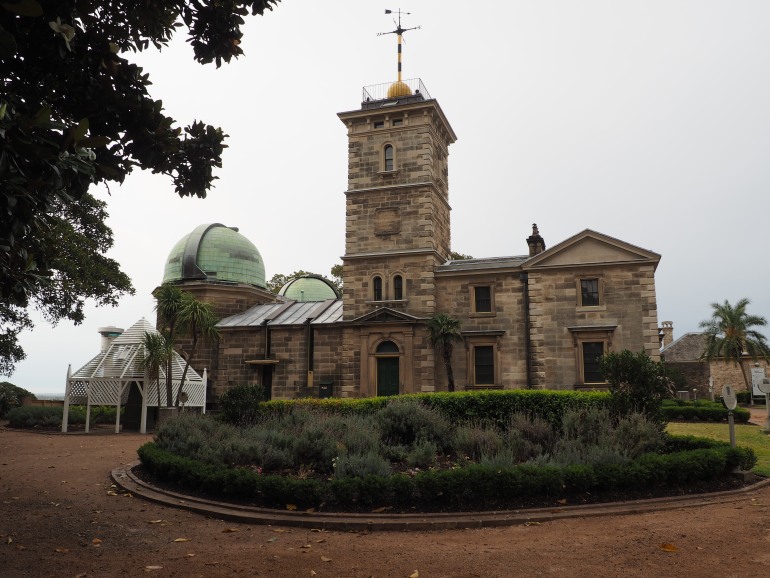 We walked back to Circular Quay and luckily it had stopped raining so we got a proper look at the Opera House just as the sun was setting. It was beautiful. 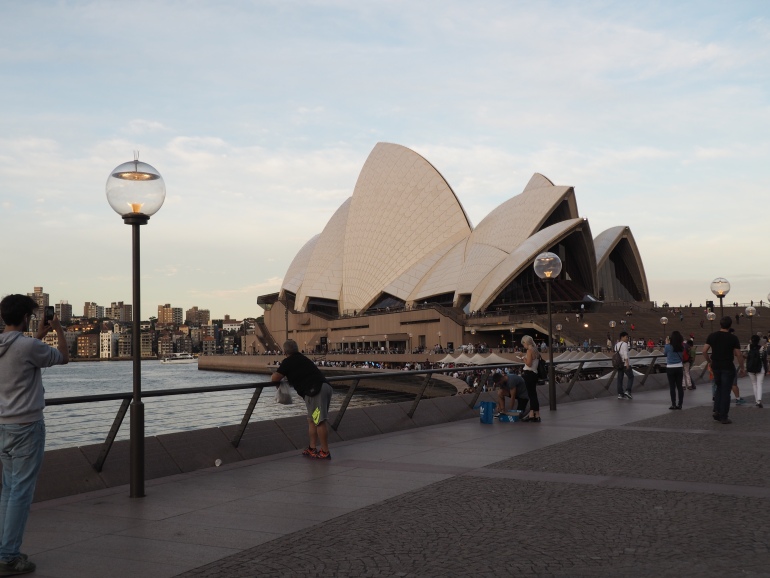 After the sun had set we got the train back to the apartment and went out to get a Chinese takeaway. I ordered vegetable chow mein but asked if I could add satay chicken to it. Luckily they said yes and I had a massive box of it all to myself, yay.

That’s it for now before this post gets any longer so make sure to look out for more on Sydney soon!