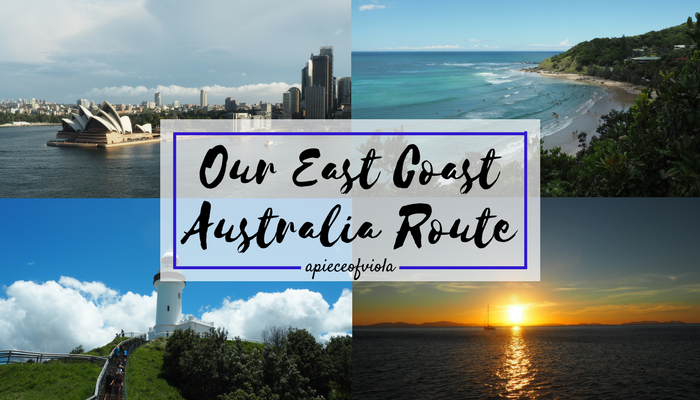 I get numerous questions from many friends and YouTube subscribers alike about where exactly Alice and I went along Australia’s East Coast and which places we would recommend. Here’s the full breakdown of where we stopped off at and which places you can’t miss.

We first flew into Melbourne which was by far both of our favourite city along the east coast. It beat Sydney hands down. Oh, and of course Melbourne has the Great Ocean Road! 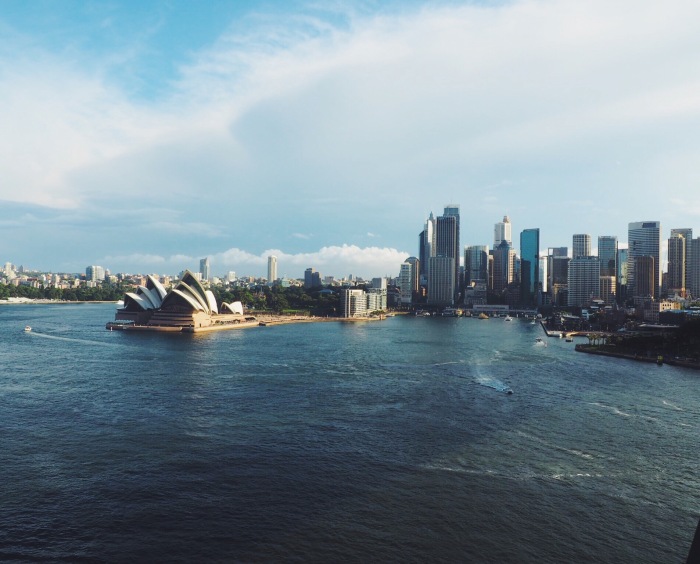 Spending Christmas in Sydney was definitely a surreal experience and one not to be missed. We lounged about, sunbathed(?!) and basked in the gorgeous heat on Bondi Beach. We spent two weeks here! 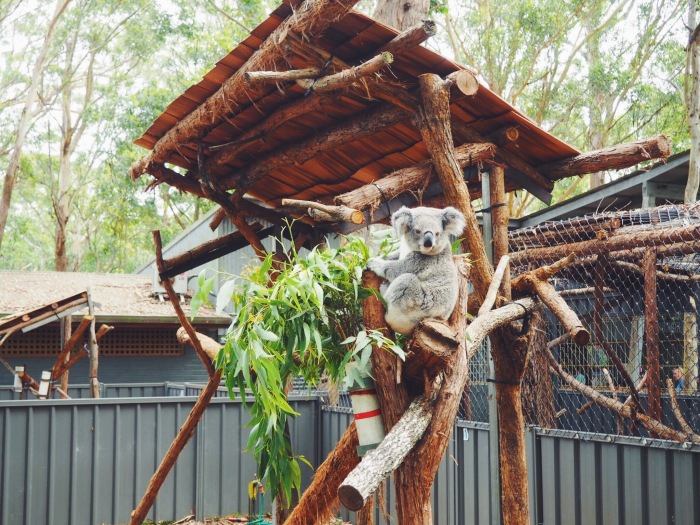 This was to break up the horrendous Greyhound Bus journey from Sydney to Byron and it was between Port Macquarie and Coffs Harbour. As cool as it may have been to see the giant banana, we opted for Port Macquarie instead because of the Koala Hospital! 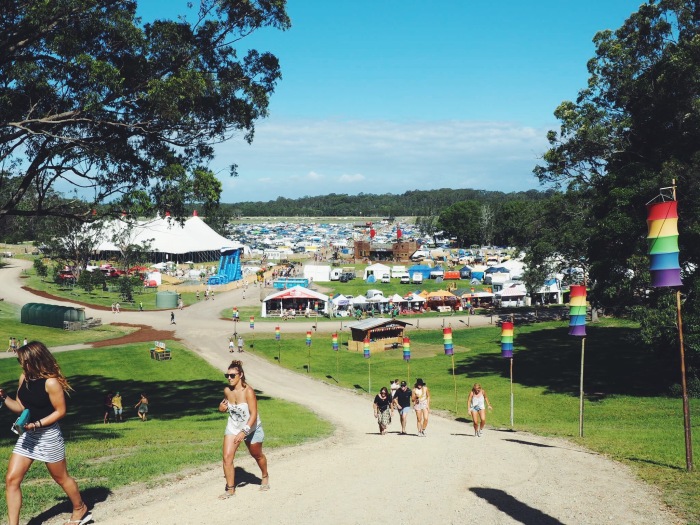 Oh Byron… how we miss you! Byron Bay is your typical Aussie-town filled with hipsters and surfers and an abundance of healthy food places. Alice and I also went to the Falls Festival here over the New Year period so it will always have a special place in our hearts <3 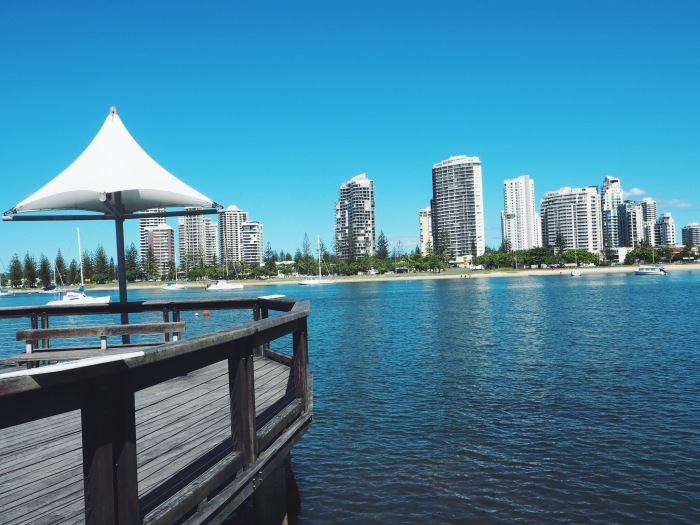 This was a stop-off between Byron Bay and Brisbane and we had heard a lot of mixed reviews on this particular city. We thought it was worth stopping off at though and the coast was absolutely gorgeous – the sea was the perfect temperature! We only stayed a couple of days though.

I wish we had stayed longer in Brisbane if I’m completely honest. Home to the Lone Pine Koala Sanctuary, Brisbane offered us the chance to get up close and friendly with kangaroos, koalas and many more animals. The city is also pretty cool but sadly we didn’t get the chance to explore.

Alice and I actually really liked Noosa. We stayed with such a lovely host in an AirBnB after spending the night in a not-so-great hostel in the middle of nowhere. Noosa is a great place for surfing and here was where we had our first surfing lesson and also where we got up early enough to see the sunrise and walk on the beach at 5am! Noosa is absolutely beautiful. I’d definitely recommend a stop-off.

The only reason one would visit Rainbow Beach is because it’s the gateway to Fraser Island and most tour companies depart from here. The town itself is absolutely tiny but we stumbled across a really cute café with backpacker discounts! If you ever find yourself in Rainbow Beach, be sure to visit Café Jilarty.

A must-see along the east coast of Australia. The world’s largest sand island filled with lots of natural lakes and creeks is something that shouldn’t be missed. We had an absolute blast on the island despite the rainy weather (granted, we were a little disappointed) but Lake McKenzie is gorgeous. The water and sand particles mean that your hair and skin feel amazing after you’ve been playing around in it.

Just like Rainbow Beach, Hervey Bay is where tours depart/arrive back from Fraser Island. Our tour company was really good as it offered the option to be dropped off in a different location to the one we were picked up at. This was perfect as we continued our journey up the east coast without having to take another coach journey! Hervey Bay was where Alice and I ended up homeless for the night so it’ll be a place I’ll never forget…

Yet another place along the east coast seen as a ‘one night before/one night after’ a tour. All overnight and day tours around the Whitsunday islands departed from here which meant that the entire town was filled with backpackers ready to partaaay. The hostel we stayed at was pretty cool and had hammocks to lounge about in – it was also really close to the coach station which was really good! 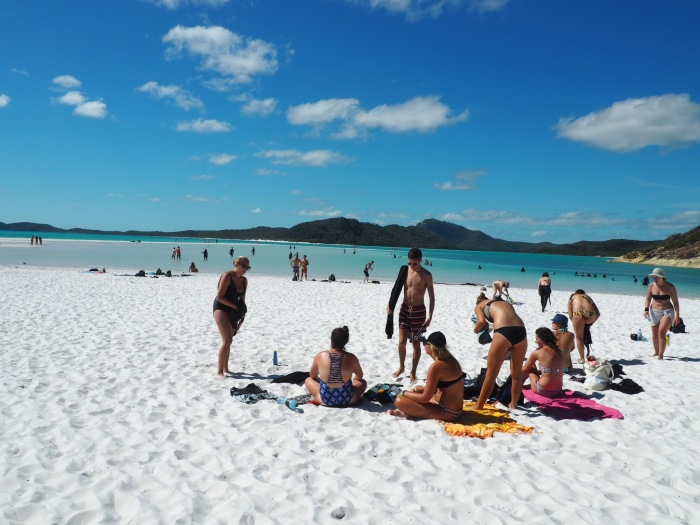 Absolutely breathtaking. If you have to choose between the Whitsunday Island Tour and the Fraser Island Tour then definitely, definitely go for this one. You’ve seen all of the postcard pictures of Whitehaven Beach but it looks even better in person. The Great Barrier Reef also starts on the edge around the Whitsunday Islands which means you get to snorkel and scuba dive in some beautiful areas.

Alice and I actually split up for a couple of days: I went to Magnetic Island with some girls we had met on the Whitsunday Islands Tour while she went straight to Cairns to complete her PADI diving course. I‘m so glad I went to Magnetic Island as it’s so pretty and serene. Magnetic Island is also the only place you can hire a Barbie Car which is exactly what we did! We also saw a lot more wild animals {wild koalas are everywhere here} and went along to Bungalow Bay’s Koala village to see even more animals.

Our final stop along the East Coast (even though we did fly back to Sydney for a couple of days afterwards…) Cairns is party central for backpackers and we stayed in the popular, party backpacker hostel that is Gilligan’s. Cairns itself isn’t much fun and it’s incredibly humid. I really, really didn’t like the weather whatsoever but the company made it bearable. After a couple of nights partying it up with all of the friends we had met along the east coast, and after our day of skydiving, we ended our east coast adventures and flew back to Sydney. Cairns is either the beginning or end an east-coast trip and in some ways, Alice and I wished we had done this first, but given how we wanted to spend Christmas in Sydney and how we had the Falls Festival over New Year, it didn’t fit in well with our schedule.

And that was our route up the East Coast of Australia! If you’re planning a trip and have any questions to ask then please don’t hesitate to ask 😉 – Alice & I will also be filming a video soon about our trip so keep your eyes on my YouTube channel.

had the most wonderful weekend back in Oxford 🥂 despite finishing my degree last year, it’s been two whole years since the Classics boys and i have been all together properly. my college decided to host a special Gaude for those who finished in 2020 as we didn’t get to experience our last summer term in Oxford, nor have our Schools’ dinner {an end-of-degree dinner with your subject tutors}. it was so lovely seeing everyone again after such a long time; it felt as though no time had passed at all and yet so many things have changed. we shared stories and reminisced on our time as students, leaving me incredibly nostalgic for my four years spent at Oxford 🥺 until next time, New College 🤍
moon in pisces 🥮🎏
postcard time ✉️ surpriseee i’m currently back in the UK! who wants a postcard from London?! to be in with the chance of receiving one, like this photo & let me know the best piece of advice you’ve ever received in the comments. hopefully we can inspire each other ✨✨ | #ViolainPortugal
Sevilla: a photo dump 🇪🇸
a misty but magical day in Sintra 🏰 i’ve had lots of requests from friends and from you guys to post all my Lisbon recs for people coming to visit for a few days. i have sooo many suggestions and plenty of tips & tricks for what to avoid/what’s worth your €€ but i’m trying to figure out the best place to share them all. would you like a YouTube video, a comprehensive blog post, IG guide, multiple IG posts {which you can save for later}, IG reels/TikTok videos OR a combination?? let me know in the comments as it would really help me out! 🇵🇹 | #ViolainPortugal
someone asked me recently what i miss about the UK {if at all}, so i thought i’d share my list with you:
snaps from the past week 🤍 if you want a postcard from me {must be following}, like this post & comment below something you’d like to achieve by the end of the year and why! let’s pretend we have more than 4 months left hahaha. for me, i want to be able to do the splits again and i’ve been majorly slacking on this ☹️ i did gymnastics as a child so used to be able to do all 3 splits and now i can do 0 ahah. maybe i’ll be able to do one side by the end of the year 😂 | #ViolainPortugal
thank you all for 10k 💫💫 fiiiinally have that swipe up link haha 🤪 huge thank you to @florianonair and the french gang 💛 i know i’ve not been posting much content lately but once your girl has had a proper night’s sleep, the YouTube videos will be returning!! thank you so much once again for all of your support, love you so much 🥺🥺
Sicília, i’ll be back 🌞 | #ViolainItaly