After our amazing three days at Falls, we found ourselves stranded there on the fourth. Not realising the reason behind everyone’s hasty retreat in the morning, Alice and I took our time to get ready and pack everything up. Little did we know that the last shuttle bus back to the centre of Byron Bay was at midday and by the time we had finished and were ready to leave it was past 1pm. Great.

There were another couple of girls who were also in the same situation as us along with a couple of guys from Manchester (yay England!) so we reluctantly decided to call a cab together (there really was no other option, sighhh). In the end, the two girls got picked up by friends so it was just the four of us in the cab: it ended up being $24 each for just a 15-20 minute ride (the shuttle was only $10 😖).

We checked back into Byron Bay Holiday Village and happened to be in the exact same apartment and room (weird). After collecting my backpack from the luggage room and getting Alice’s bag of valuables from the safe, we both tried to get some rest.

The next day (Monday 4th Jan) was also spent recovering from the festival – we were absolutely shattered and it was great sleeping in an actual bed again! After sleeping all day we ventured out in the evening to get some smoothies. 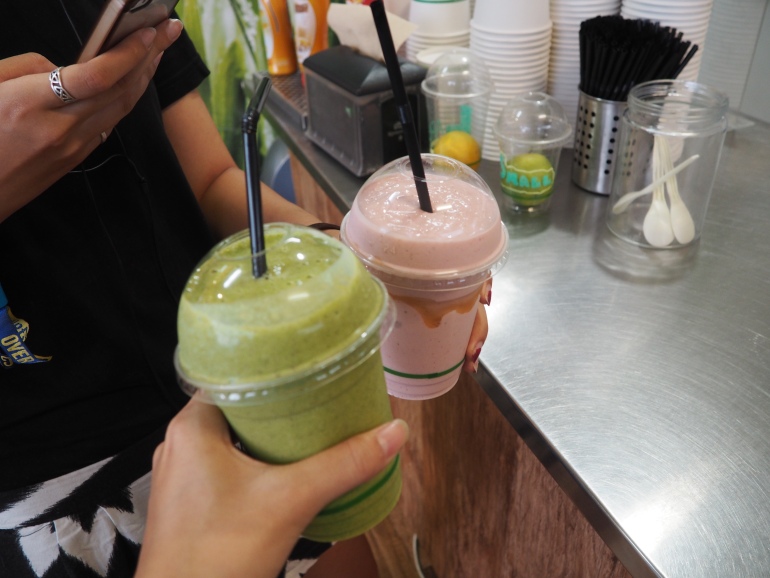 I was really excited to choose a flavour (there were sooo many) but I eventually decided on the green G-force 2: coconut water, kale, spinach, banana, pear, pineapple, apple juice, maca and chia seeds. It was so good. 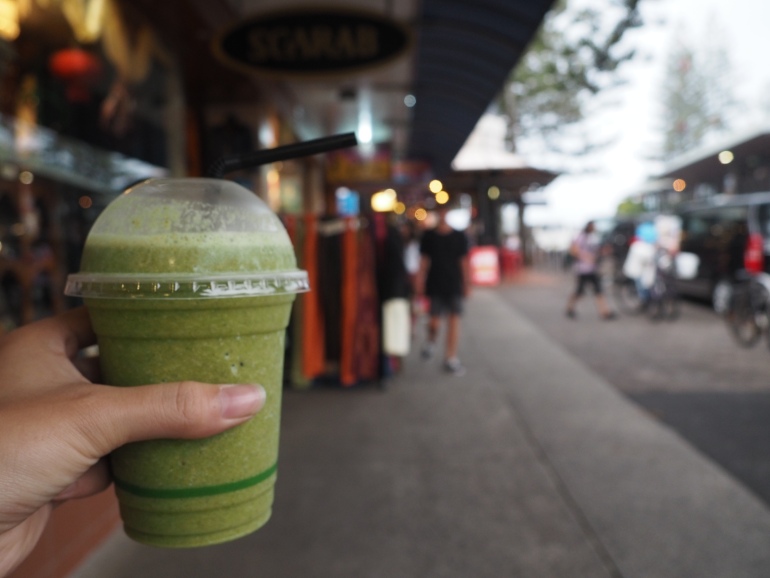 Later, as we were walking back, we passed a sign saying ‘Free chai + pancakes’. Being backpackers, Alice and I jump at anything with the word ‘free’ attached to it and that’s exactly what we did.

We had a hot pancake with sugar and lemon and sat down on the blankets to enjoy the live music. These guys were really good and it was such a nice evening; this was definitely one of my favourite moments in Byron Bay.

Tuesday 5th Jan
We decided to extend our stay in Byron for one more night as we hadn’t done the Lighthouse walk yet (we were simply too exhausted to) and also the weather had been pretty crappy.

Unfortunately for us, the weather wasn’t in our favour yet again: it was pouring it down. However, funnily enough, Alice needed to do some UCAS research to make some important decisions and so the rain was actually a blessing in disguise. We could both do this and spend the day glued to the computer screen without feeling as though we were missing out on a beautiful day (yay!)

That evening, having not gone to Cheeky Monkey’s before going to the Falls Festival (read about that here), we decided to go for dinner since our hostel got us good deals. I managed to grab a Greek salad for $5 (I’d really been craving one) and Alice chose ribs with chips and coleslaw for $7.50. We also got free drinks vouchers (though never actually ended up using them). We left early and the night ended with us breaking open our Terry’s chocolate orange (I don’t really know why we didn’t eat it at Falls…)

Wednesday 6th Jan
We finally got round to doing the Lighthouse walk and luckily for us, the sun was finally out.

The coastal view was absolutely gorgeous and I was so glad to have done the walk even though the lighthouse was shut.

On the way back we got smoothies from a different juice bar and then burgers and chips for lunch. We only had half an hour to do this on top of collecting our luggage back from the hostel and getting to the coach terminal because the walk took longer than anticipated – it was a serious rush!

I went for a mango, strawberry and banana smoothie this time and it was so good. You gotta love a good smoothie, right?

We then had to hop on our coach to Surfers Paradise, goodbye Byron!

0 thoughts on “Smoothies, recovering and the Lighthouse walk | Byron Bay”