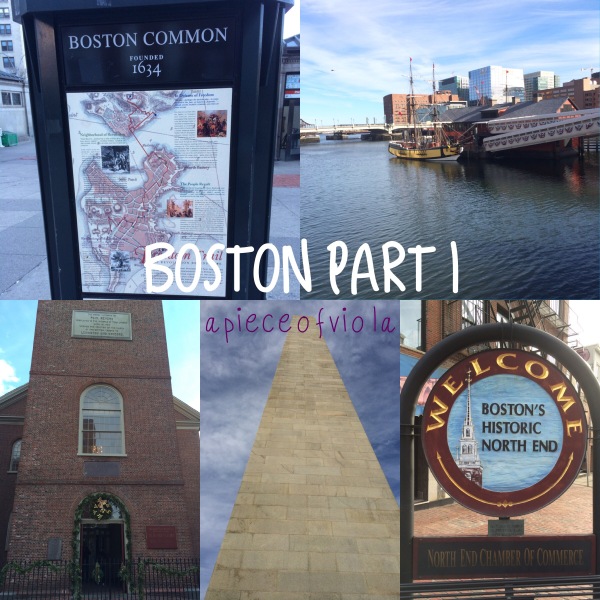 After Christmas, the next big event I had in my diary was a trip to Boston, Massachusetts. We planned on leaving on the morning of Sunday 28th December, 2014.

After an enjoyable flight (roast beef for dinner? yes please!) we managed to work out how to get to the hotel using the T subway. 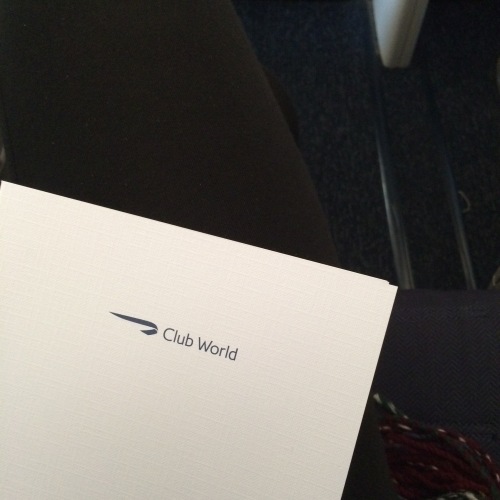 As soon as we emerged from Downtown Crossing station, we saw a huge Christmas tree sticking out of Macy’s: 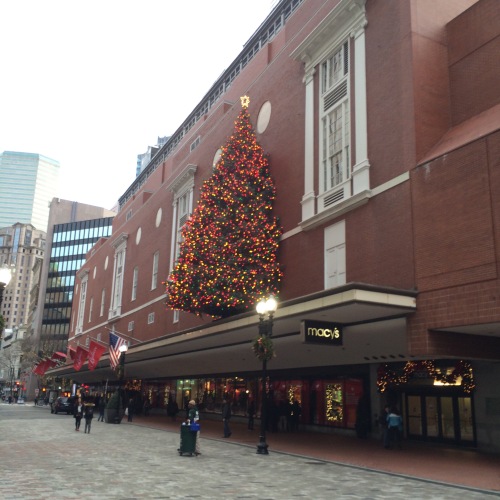 We had booked ourselves into Omni Parker House for five nights and it was a really pleasant stay. They had an amazing Christmas tree in the foyer – I couldn’t get over how pretty it looked *heart eyes* 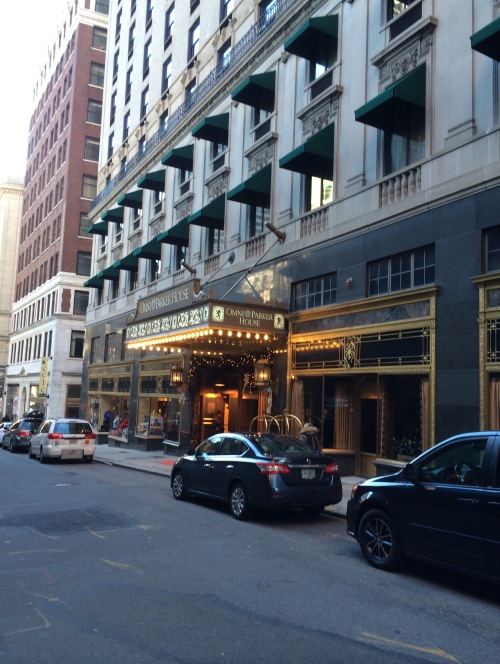 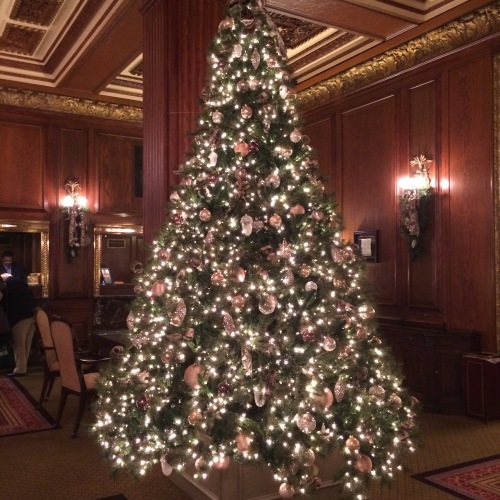 Although it was only early evening in Boston, since England is five hours ahead, we were absolutely exhausted. We wandered around the town for a short time and then decided to get an early(ish) night {depends whether you’re referring to UK time or Boston time}.

Monday 29th
Mum has an incredibly early body clock so she woke up at about 3am Boston time. I woke up at 5am so we all went out for breakfast at 5:30am(!) I had blueberry pancakes – gosh, I’ve missed American food! We decided to do the Freedom Trail today since we were up nice and early and full of energy.

The photo above is misleading. It looks lovely and warm but in actual fact it was bitterly cold. I had to wear at least four layers on top, a scarf and gloves! 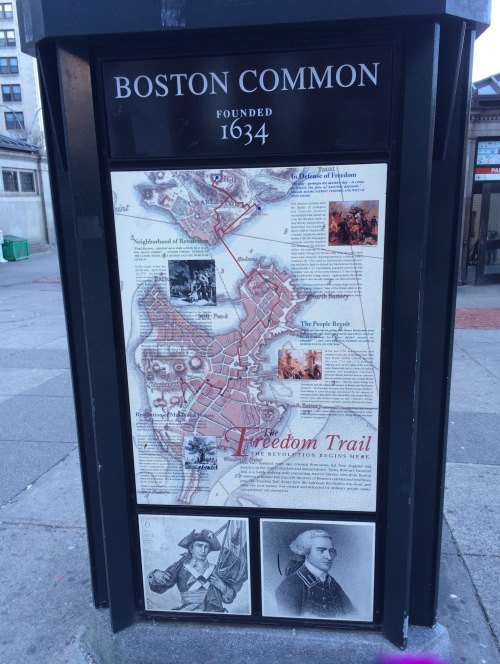 The Freedom Trail started at Boston Common and it led us on a 2.5 mile walk around all of the various sites. I never fully realised how rich the history was in Boston. There are so many museums and historical houses to visit and so much to learn about here. It was fascinating. 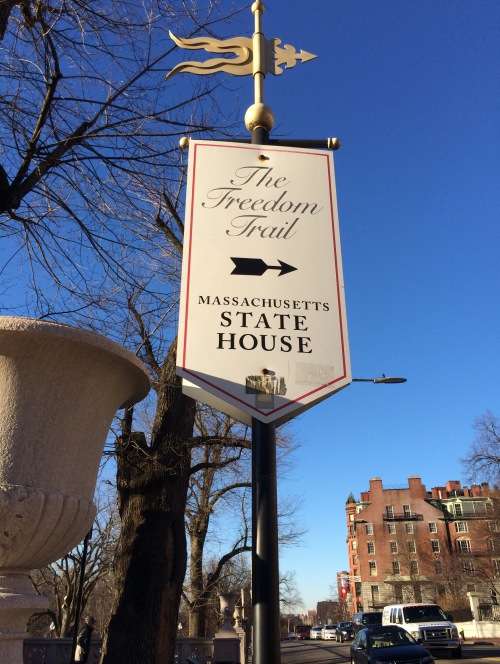 Unfortunately, the State House was closed when we arrived there at about 9:30am. It still looks really pretty though!

We then followed the Freedom Trail to the Old State House, which we visited. It was really interesting because the Boston Massacre happened directly in front of the house; I was standing on a very important historical site. Furthermore, the house itself held great significance: on July 18, 1776, the Declaration of Independence, was read for the first time to the public on the balcony of the house. 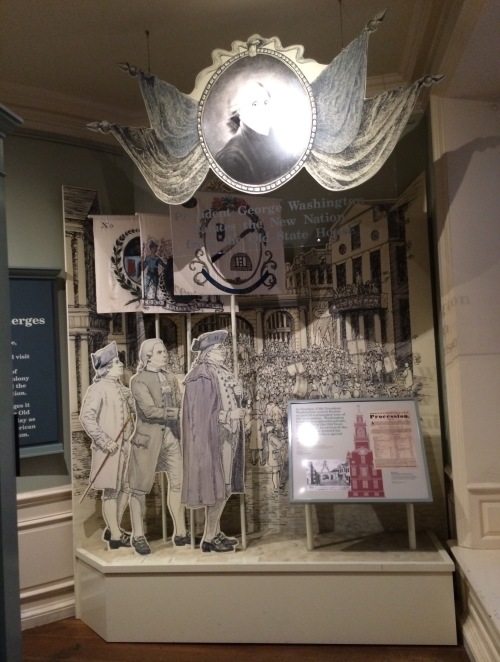 We continued to follow the trail and walked past a statue of Paul Revere: 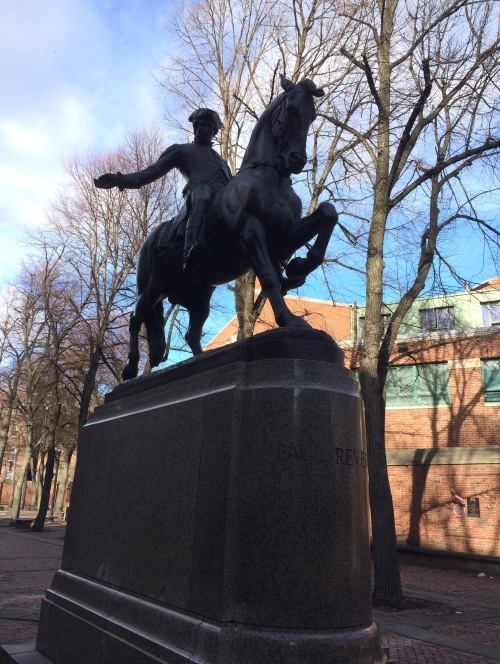 Straight ahead from this was the Old North Church. It was really nice to visit this church since I was able to learn even more about American history and see the place where the lanterns were actually shown! 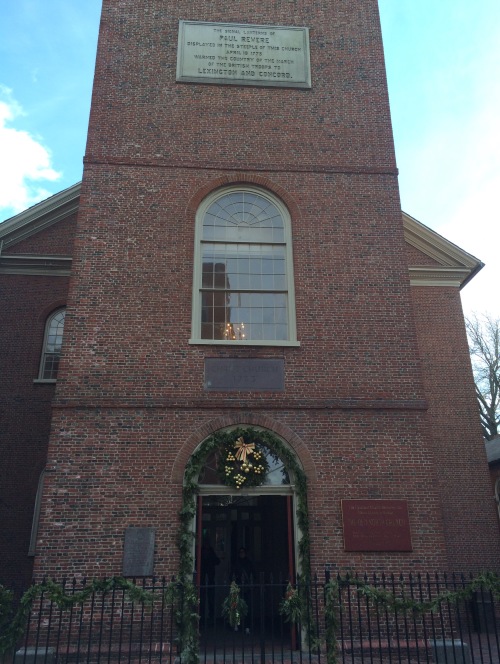 We visited another graveyard and then decided to walk back towards Downtown Boston since the Freedom Trail was leading us over the bridge to catch a ferry (which we didn’t want to do). My sister and I then decided to go shopping on Newbury Street. Here’s a cheeky AA selfie: 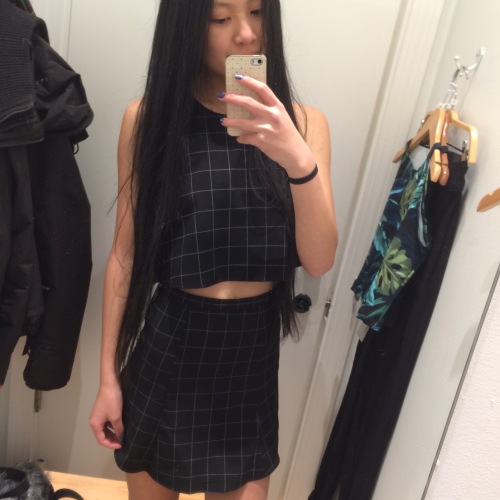 In the evening, we went to a local diner and the food was so good.

Another early start. We grabbed breakfast at Starbucks at 5:30am. Seriously! I got to try a caramel brulee latte which the UK doesn’t do {it was fab}.

We walked over the bridge and made our way to Bunker Hill. Here are a couple of photos of the harbour: 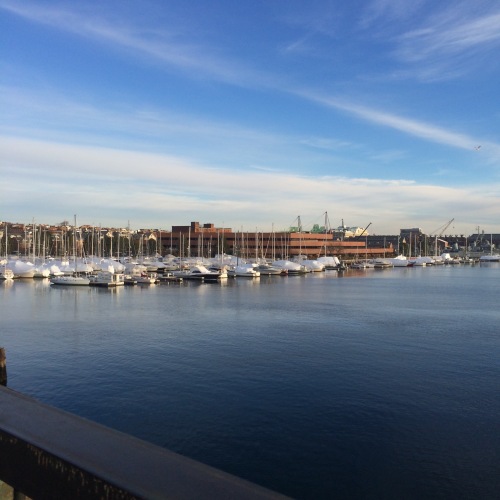 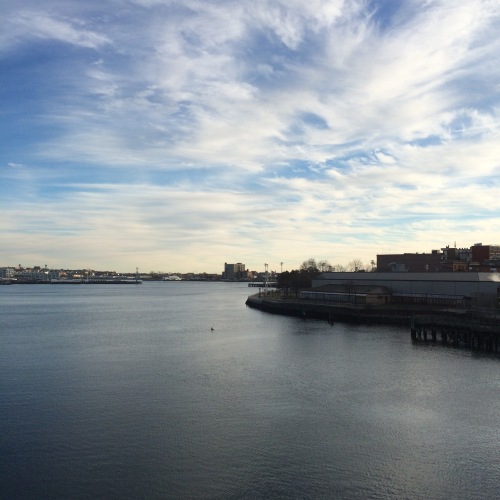 It was absolutely freezing that morning, around -2 degrees?! 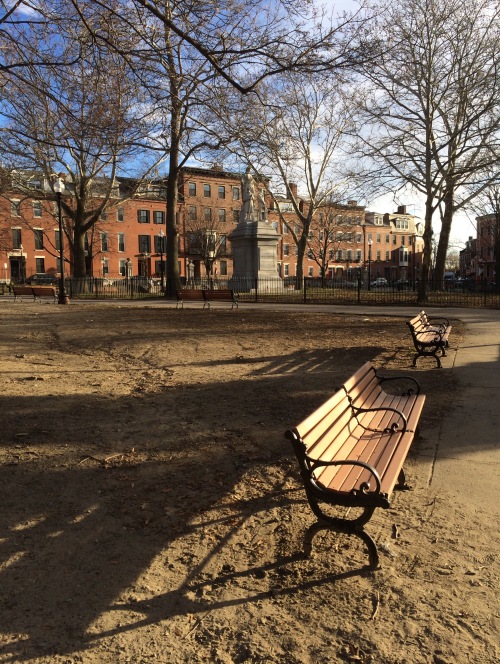 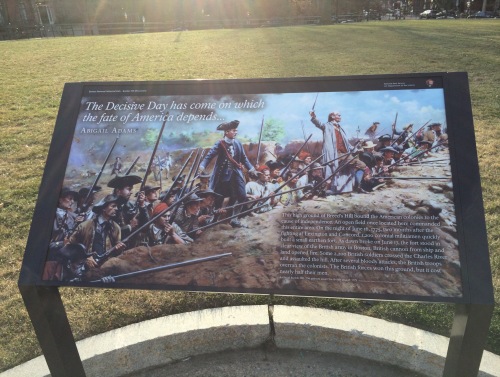 I made a small gallery showing photos from the top of the monument since it was a really good view!

It was only about 10am by the time we climbed back down. Following the Freedom Trail back over the (fairly rickety) bridge, we visited the Boston Tea Party Boat & Museum. 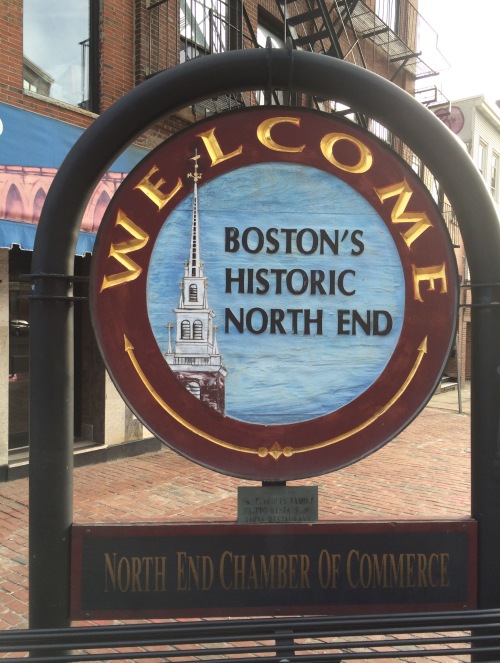 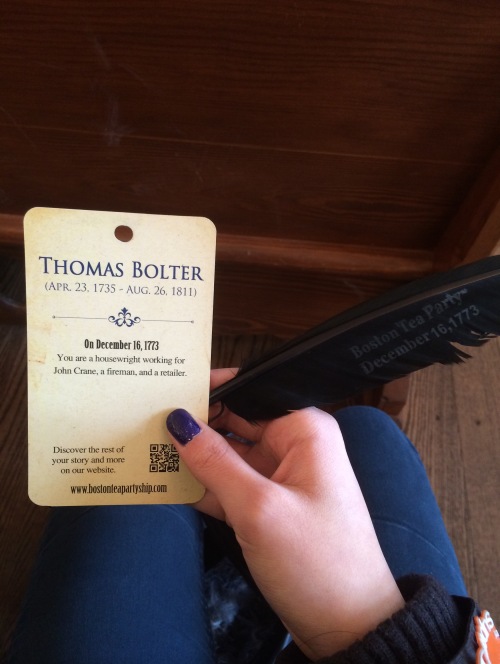 Upon purchasing tickets, we were told to choose a feather and were greeted by actors playing the various historical characters. We were also given a card with a person on: this is who we would play. After a short (and acted) introduction to what the tea party was all about, we were led onto one of the ships and learnt more about what actually happened. We were then led to the museum section and our guide told us information about the aftermath. It was a really enjoyable experience – something I would definitely recommend doing! 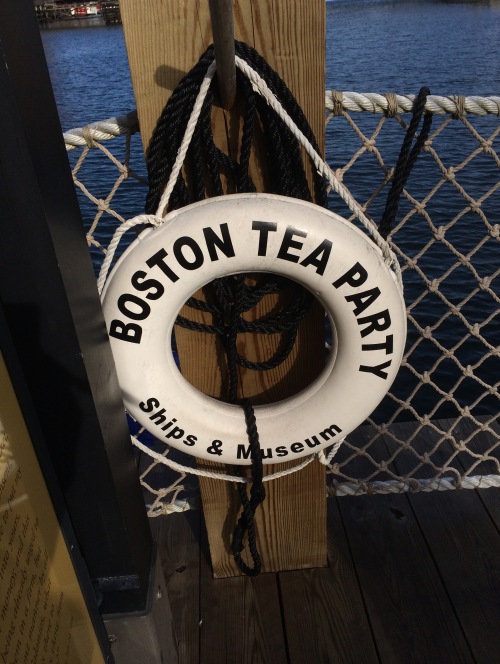 We made a quick trip to Bolyston Street (another shopping street) and then went to Atlantic Fish Co. for a late lunch. I ordered the seared Atlantic salmon salad which was absolutely divine. 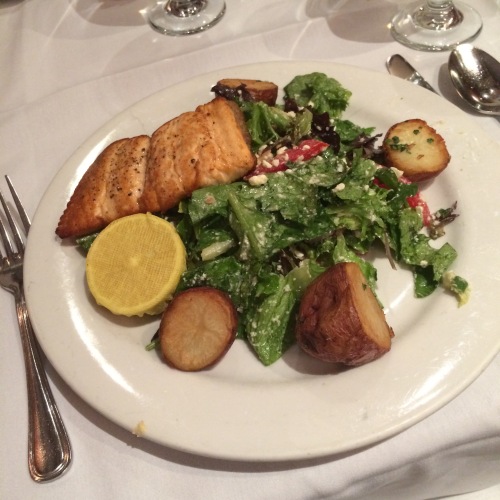 All in all, my first few days in Boston were really enjoyable despite the bitterly cold weather!

No images found!
Try some other hashtag or username